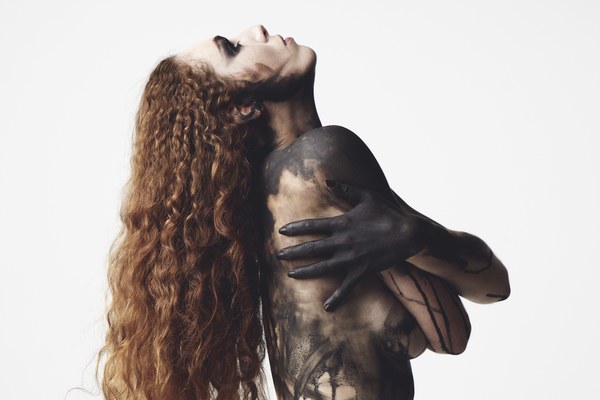 We get up close and personal with Kate, lead singer from Gallows Ghost. She tells us about new EP Arrows and rockin out at Secret garden party

London Six piece Gallows Ghost are intent on carving out a unique musical niche. A blend of electronic folk and rock.  They give their feverishly receptive audiences big chorus hooks, driving bass lines, strings and beats, but despite musical ingenuity akin to that of Florence, Goldfrapp, Massive Attack and London Grammar, the audiences fervour is definitely increased by the tall, flame haired beauty at the front of the stage, Kate Young whose distinctive and haunting vocals soar effortlessly across the bands ambitious tracks.

Flamboyant and a little theatrical ‘Gallows Ghost’ the band have just the right amount of drama and style, often raiding the dressing up box for their live performances and videos to delight the eyes as well as the ears. Vocalist Kate is also a model (her credits include working for Vivienne Westwood) a painter and an actress. Her dad is film director Robert Young, well known for his work on 70’s Hammer Horror classics and TV series such as Jeeves and Wooster, Robin of Sherwood and Fierce Creatures. Fellow band members are: Lewis Young (bass and keys) Mako (guitar) Hannah Lloyd (Cello) Rachel Swift (Violin) Jack Darvill (Drums)

On their new EP ‘Arrows’ the band have worked with Bristol producer Chris Goulstone (whose former collaborations include; Geoff Barrows from Portishead, Alison Goldfrapp & Mushroom from Massive Attack) like a mechanic refining a well oiled engine, Chris brings elements of Primal Scream and Maya Jane Coles giving their new material a much harder, faster and darker edge.

For more go to: